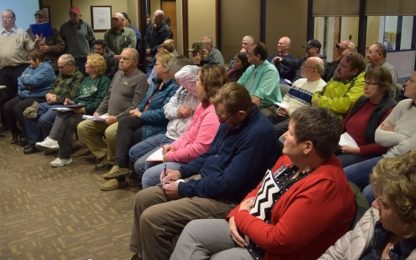 (Redwood Falls, MN) – On Jan. 7, the Redwood County Commissioners voted to consent to allow the federal government to settle refugees from other nations to settle in the county.

On Tuesday, a standing-room-only audience attended the Redwood County Board meeting to express their concerns about the vote.

Many residents were concerned about what allowing more refugees might mean in terms of taxes and public safety.

Redwood Falls resident Gene Swede suggested the federal government was using the refugees in a sort of con game.  “This is a bait and switch the whole way.  I want you to vote and rescind it today,” said Swede.  “Get our face out of this rat trap.  This is not any good for us, and it’s not any good for these people.  We can’t help them.”

Swede said Redwood County is poor and sparsely populated, the farming community suffering. “We can’t afford this,” Swede continued.  “These articles saying how wonderful it is for these refugees…it is not.”

Wabasso farmer Paul Sobocinski had a different view.  Sobocinski said the Christian faith meant to open the door and to love God and his neighbors. “If someone comes to my door, I’m gonna open it,” Sobocinski said.

Several times toward the end of the meeting, many residents demanded the county board immediately vote to rescind the Jan. 7  vote.

One thing residents of both views agreed on was that the citizens of the county hadn’t been properly informed about what the vote meant, and asked for a public forum for the issue to be discussed for more public input.