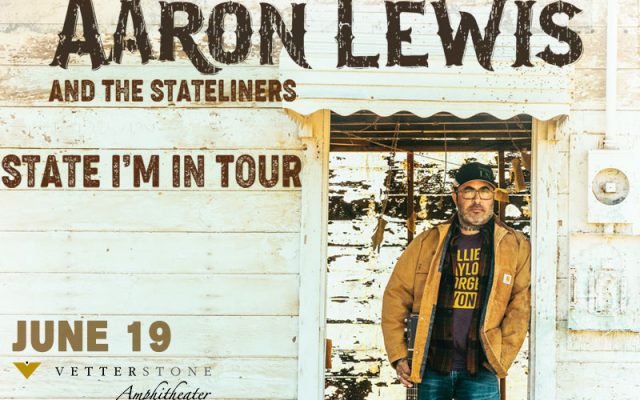 AARON LEWIS AND THE STATELINERS

Mankato, MN – Aaron Lewis is coming to Mankato this summer at the Vetter Stone
Amphitheater Saturday, June 19th, 2021. Tickets start at $33.00 plus applicable fees and are on
sale Friday, May 7th at 10:00 AM.
For updated guidelines, and our complete COVID-19 Preparedness Plan, visit
www.vetterstoneamphitheater.com.
Aaron Lewis
Known for his outspokenness, impassioned live show and Outlaw Country tunes, Aaron Lewis is
back with a new album, the Buddy Cannon-produced STATE I’M IN. Lewis wrote six of the 10
tracks, which also features cuts by acclaimed songwriters Dan Tyminski and the late Keith
Whitley, among others.

STATE I’M IN is the follow-up to SINNER, which went No. 1 on Billboard’s Top Country Albums,
Top 200 Albums, and Top Digital Albums Charts upon release chart and blasts through today’s
Country music doldrums like a shot of 100-proof whiskey, with the singer making zero
compromises with either himself
or the restrictions of a format that seems to have abandoned its rougher tendencies in favor of
pop and ‘70s rock inclinations largely lacking in grit.
Lewis has sold 13 million albums worldwide and four consecutive top three debuts on Billboard’s
Top 200, including the single “It’s Been Awhile,” which remains the most-played rock song of the
decade. Lewis is currently headlining the STATE I’M IN TOUR that spotlights his outlaw Country
roots.

Established in July of 2006, Pepper (PE) is based in Sioux Falls, SD. As one of the fastest scaling,
independent promotions company in the Midwest, PE, collectively, exceeds 25 years of
experience spanning a broad scope of industry specialties, such as; Live Promotions, Corporate
& Private Event Talent Buying, Club & Performing Art Center Programming & Media &

Mankato's Rock
CONNECT WITH US LISTEN TO US ON